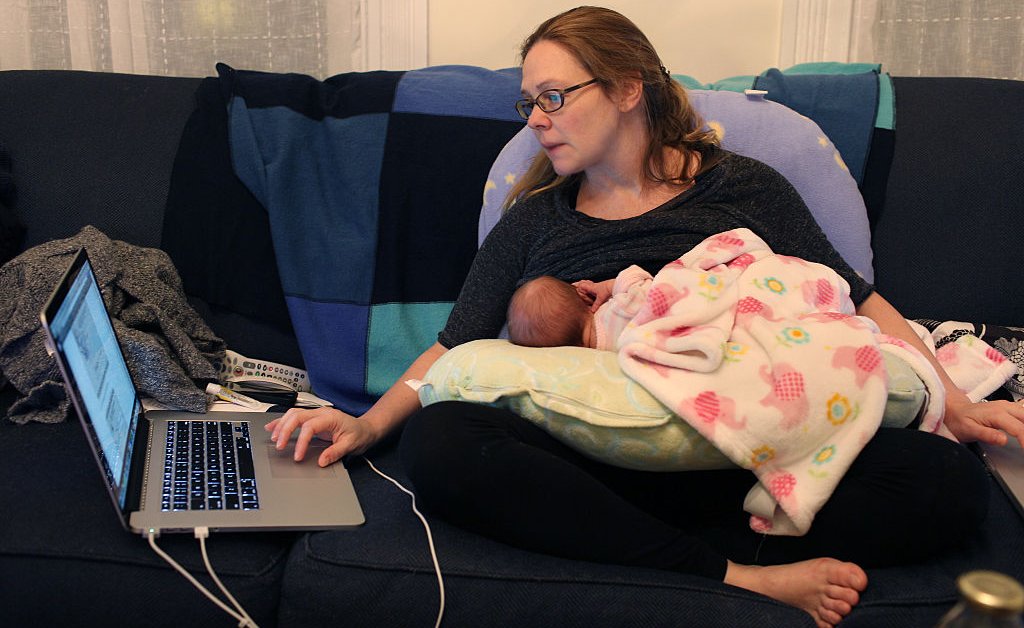 Access to breastfeeding is an issue in the workplace

LLast week, after the American Academy of Pediatrics released a new policy increasing the recommended length of breastfeeding from one year to two, the mood in my mom’s group text was darkly incredulous.

“Hahaha, my first thought was ‘oh fuck no,'” one response read.

Although the AAP has indicated in its guidelines that “significant societal changes” are required for its recommendation to be achievable, the acknowledgment is – well, it’s a bit of an understatement to call it an understatement. Feeding a baby is hard work, even at the best of times. At present, as parents in the United States grapple with the loss of their reproductive rights, an ongoing shortage of infant formula, a child care crisis, and the still-fresh loss of initiative last year’s paid family leave is not the best of times.

Recent events do not inspire much confidence that these societal changes are on the horizon. Just weeks ago, the Senate failed to advance the PUMP for Nursing Mothers Act, which would have closed a current loophole in The Break Time for Nursing Mothers Law, federal protection against pumping in workplace that excludes approximately 9 million women of childbearing age.

The law, which requires companies to give breastfeeding parents unpaid time and a space other than the bathroom to pump, does not apply to workers exempt from overtime protections, i.e. say salaried and hourly workers in certain roles, nor to employers of less than 50 people. (A separate federal law, the Pregnancy Discrimination Act, states that breastfeeding employees cannot be treated differently from their co-workers, but does not require workplaces to provide accommodations for breastfeeding parents if they do not provide no similar arrangements for other workers.)

Meanwhile, infant formula stock prices are not expected to return to normal for several weeks, prolonging a hunger crisis that has sparked misguided calls to ‘just breastfeed’. But as many people have already pointed out in response, breastfeeding is not something that happens “by chance”. It’s something that only happens when a parent’s financial, family, and medical circumstances align perfectly with their willingness to sacrifice an astonishing amount of time, energy, and freedom. Since the body produces milk based on the baby’s perceived demand, experts advise breastfeeding parents to pump about every three hours for the first few months to maintain their supply.

According to a widely quoted estimate, breastfeeding takes about 1,800 hours of time in the first year, making it barely less time-consuming than a full-time job. By my personal estimate, about a million things had to go right for me to be able to breastfeed my son like I have for the past six months. I could afford the breast pump, the milk storage equipment, the multiple visits to the lactation consultant, the prenatal vitamins. I had a partner at home who did more of the housework so I could focus on being our baby’s only source of food.

Importantly, I also had a supportive employer, an employer with a culture that emphasized caregiving and made sure I could ask for what I needed. When I had to travel for off-site work my second week back from parental leave, they didn’t just make sure the office space we were using had a lactation room; they proactively booked it, made sure the day’s break schedule was workable, and offered to arrange for my baby and husband to come with me, if that was what it took to make the trip feasible.

How a family feeds their child is generally considered a personal choice, but workplaces have amazing power in determining whether, and for how long, a parent is able to breastfeed. And right now, at the national level, they don’t have to do much to exercise that power fairly.

“If you don’t have these protections, you could lose your supply within days,” says Sarah Brafman, senior policy adviser at A Better Balance, a legal advocacy group for caregivers.

But even workers who fall within the bounds of the law may be uncomfortable pushing for the time they need. “We’ve spoken with a lot of parents who say, ‘I’m trying to pump as much milk as I can right now, because when I get back there’s going to be no way I can make this work,'” says Jessica Lee , senior attorney at the Center for WorkLife Law at the University of California. “A lot of people are aware of the legal requirements, but feel like they’re going out of their way to even ask what they’re legally entitled to.”

And what they are legally entitled to is often not enough. A worker may have the space and time to pump and still be more or less discouraged from feeding his child in any way he chooses. Here are other ways workplaces can make breastfeeding more accessible:

Ideally, an employer’s support for breastfeeding workers begins long before they return to work. “Paid time off is really at the heart of it all,” says Lee. “In the early postpartum period, many of these workers have to breastfeed or pump very regularly. And if you don’t start with this quality routine, it’s very difficult to continue breastfeeding later. Milk supply is usually established during the first few weeks after birth, which means breastfeeding parents who cannot breastfeed or pump regularly during this time will end up producing less milk than their baby needs. ; meanwhile, a quarter of women giving birth in the United States returned to work within two weeks.

Sick day policies also determine whether parents can afford to take time off to meet food needs that inevitably arise. “That paid sick leave can be crucial,” Brafman says. “to be able to go see a lactation consultant, if you have trouble latching on, or [to recover] if someone gets mastitis,” a painful breast infection that affects around 10% of people who breastfeed.

And for many other reasons. When my son was a few months old, he and I made several trips to a clinic an hour away for his tongue tie, a restriction that prevented him from eating: one trip for the diagnosis, another for the procedure to remedy. , each occupying at least half a day in total, plus post-operative checks. Other parents I know had to take their children to regular weigh-ins to make sure their babies were getting enough. And for formula-feeding parents during the shortage, having paid time off to travel from store to store in search of formula can mean the difference in getting the supplies they need. need.

Earlier this year, in a Zoom for a group of new parents I joined, the host gave us some advice. We should block time on our work calendars for pumping, but we shouldn’t note on the calendar event what that time was used for, she warned. It was something she had heard in her years of working with mothers as they returned to work: if co-workers knew it was for pumping, they could plan something over it.

Seemingly small elements of how a company approaches meetings can play an outsized role in allowing its workers to breastfeed. There are social norms, like keeping schedule details confidential (for a number of reasons, an employee might not want to broadcast when they’re pumping) and a culture of respecting others’ schedules when determining meeting times. In remote and hybrid environments, there are also Zoom standards: “We’ve seen people penalized for turning off their camera during large staff meetings [to pump]”, says Lee. A camera-optional policy has many benefits, but one of them is that it gives breastfeeding parents more space to express milk or feed on schedule.

A common battleground for breastfeeding employees working in person: storing milk in the office fridge. “A lot of employers are scared of it,” Lee says. The Occupational Safety and Health Administration “has made it clear that this is not a biohazard, but when we see cases like this, we often rely on anti-biohazard principles. basic discrimination: why does this boss choose breast milk? do they regulate what Bob in accounting puts in the fridge?”

Even when human resources and managers support the breastfeeding needs of their workers, others in the office may not. Lee heard from workers whose co-workers threw away their milk and others who found angry notes on their milk asking them not to store it in common areas. Remote work can be a respite in these types of situations, but the lack of shared space alone isn’t enough to turn a breastfeeding-unfriendly culture into a supportive one.

The best way to get everyone on the same page is to communicate policies to all employees, not just those directly affected. Employee handbooks should include the company’s lactation policy. Diversity, equity and inclusion initiatives may include materials on caregiver support. Harassment trainings — another area Lee says she often hears complaints about — can cover what is and isn’t okay to say to a nursing co-worker.

“The more employers can disseminate this information, the better,” she says.

Brafman notes that another best practice is for employers to make sure workers know their breastfeeding policy before taking parental leave. “Make it clear to workers that breastfeeding is encouraged and make sure the conversation is relayed from the start,” she says, “so someone coming back to work already has a plan in place and doesn’t have to. struggling to figure it out.”

One trap that workplaces can fall into is assuming that a breastfeeding employee can comfortably fit into the accommodation of the one before her. “I think it’s important to remember that not everyone’s breastfeeding journey is the same,” says Brafman. “Some people may need to breastfeed twice a day. Some people may need to breastfeed four times a day. Both are completely normal and should be encouraged, recognizing that people have their own individual needs, meeting individual employees where they are, and not expecting everyone to be at the same pace. with each other” – a practice that not only serves breastfeeding employees, but their colleagues as well.