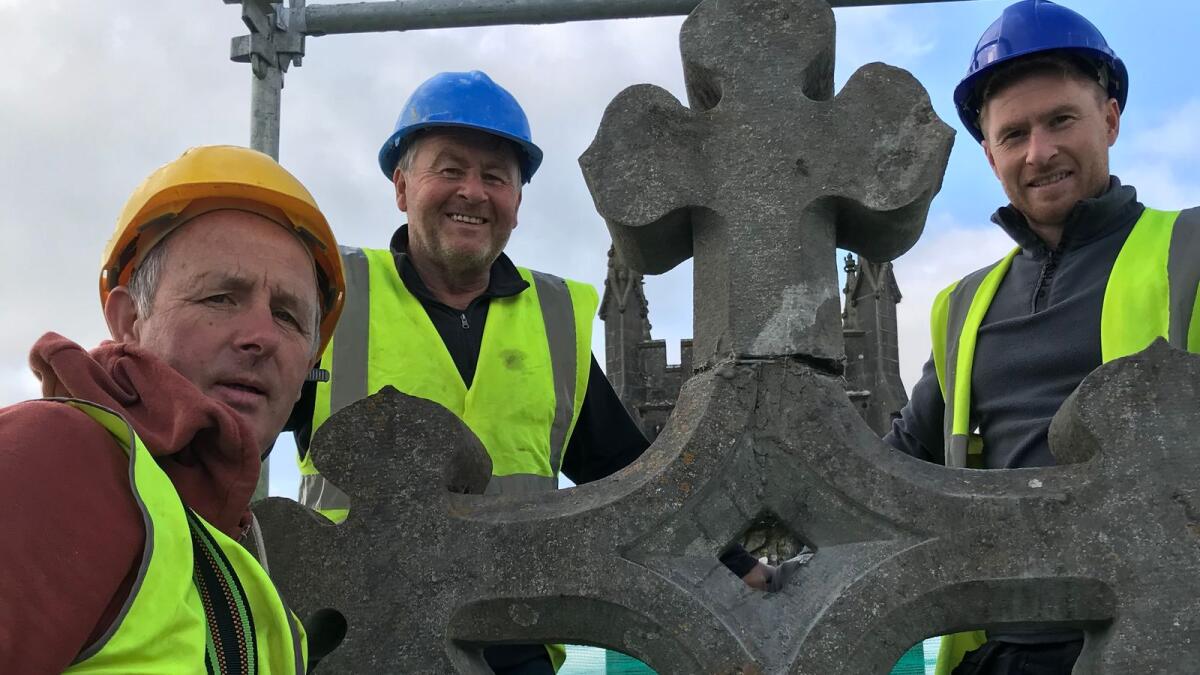 Work has been completed to restore an ancient stone cross at Christ Church, Castlebar.

The project of one of the oldest buildings in the city, dating from 1739 when its first stone was laid, took several months.

The north-facing cross was removed over a decade ago when it was deemed unsafe, with the issue first brought to the attention of the church by local developer the late Tony McHugh.

Since its removal, the cross had been carefully kept in storage with the intention of returning it to its top, overlooking the mall, when the time was right.

Based on an architect’s survey conducted several months ago, a decision was made by the church’s chosen sacristy to proceed with the work.

Scaffolding was put in place by Noel Barrett to facilitate the project which involved creating a new support for the cross.

Trevor Ardill, Secretary of the Select Sacristy, said: “After long and serious consideration of the matter, we made the decision last April to proceed, with necessary arrangements made with respect to costs etc.

“As the stone cross was part of the church when it was built, it is fitting that it should be put back in its place.”

Many people living in Castlebar may not have noticed that this historic feature disappeared from the town’s landscape 12 years ago.

However, its return to its former glory is certainly cause for recognition and celebration.

The work was carried out by builders Michael Moran senior and junior, with stonemason Jimmy Burke, and supervised by diocesan architect Vincent Coleman and Robert Carson.

A generous donation was made by a local benefactor to help defray the costs.

The works included a lightning protection system while the repointing and repositioning of the copings was also carried out.

A number of renovation projects have been carried out on the church over the years, the most recent of which was the cleaning of the south-facing clock in July 2020 while in 2001 the slate roofs were replaced by ridge tiles.

The clock is maintained to this day by Ivan Browne.

The first renovations were carried out in the early 1800s following a fire.

The church is located directly across from Bingham’s original residence, connected by a path that runs through the mall.

According to local historians, this path was a private tree-lined promenade for the Lucan family to attend their services.

The Mall was then known as The Green.

Much has been written about the historic building over the years.

The National Inventory of Architectural Heritage described it as “representing an important element of County Mayo’s early 19th century ecclesiastical heritage with architectural value of composition”.

Locals and visitors alike can explore the history of the town of Castlebar from 1590 to 1914 through numerous commemorative plaques in the church while the adjoining graveyard is also very rich in historical value.