Claudia Schmitz, center, holds the proclamation issued by the Grand Island Town Board, honoring her late husband, Rick Schmitz II, as head of the water station for the annual Dick Bessel Run. With her are her daughter, Jill Metz, and her son, Richard Schmitz III.

Story and photos by Alice Gerard

The first proclamation was issued in memory of Rick Schmitz II, who died March 2. It officially names the water station run by the Schmitz family since the 1990s for Dick Bessel’s Independence Day race the “Rick Schmitz II Memorial Water Station.”

According to the proclamation, read by City Supervisor John Whitney, Schmitz was recognized as a “beloved husband, father, grandfather and water station manager.” The water station, according to the proclamation, provided a valuable service to the community by providing runners with “water, sprinkler stations, music and mid-race fun.” “The city,” Whitney said, “recognizes Rick Schmitz for his dedication to the community.”

Eric Volk, who works with Premier Sound, was recognized in the evening’s second proclamation as an “announcer extraordinaire”. According to the proclamation, Volk has “devoted ten years to advertising himself as a DJ for the 4th of July and the Dick Bessel Independence Day Run.” Volk was recognized for his “knowledge of Grand Island and the parade participants”.

“He brought energy, excitement and laughter to the parade,” Whitney said. “By his own recognition, he’s here to announce the parade forever.”

•A community forestry plan has been approved, following a tree inventory completed in the fall of 2021, by Lori Brockelbank and a team of arborists from the Davey Resource Group. This tree inventory was funded by a grant from the state Department of Environmental Conservation. Brockelbank, who mentioned that Davey Resource Group recently opened a new office on Grand Island, said 11,000 trees in city parks and rights-of-way had been inventoried.

“We looked at what these trees give you, in terms of eco-benefits,” Brockelbank said. “Each year, these trees give back to the community more than $25,000 in clean water, clean air and carbon sequestration. Plus, if you replaced each of those trees today, you’d have over $10 million. The value of these trees is close to $11 million.

She pointed out that elements of the newly approved forest management plan include a planting plan, a storm plan and an invasive species plan, in addition to the regular management plan. Brockelbank said the town had too many maple trees: “The bottom line for the community is to stop planting maple trees.”

Brockelbank mentioned that the spotted lanternfly, an invasive inspection species, has been observed in western New York and can do a lot of damage to maple trees.

“We want to reduce the risk of losing all the trees at once,” Brockelbank said.

•Two public hearings have been scheduled for the July 18 City Council meeting. The first is Preliminary Subdivision Approval for a minor subdivision at 859-891 East River Road. This small subdivision is made up of four lots. The second concerns the creation of the City of Grand Island Strategic Planning Commission.

• A site plan, submitted by Brick Oven, 2457 Grand Island Blvd., to replace an awning with a permanent roof structure, was not approved. It was defeated by a 3-2 vote, with councilors Mike Madigan and Christian Bahleda voting in favor of the site plan, and Whitney and councilors Pete Marston and Tom Digati voting against. 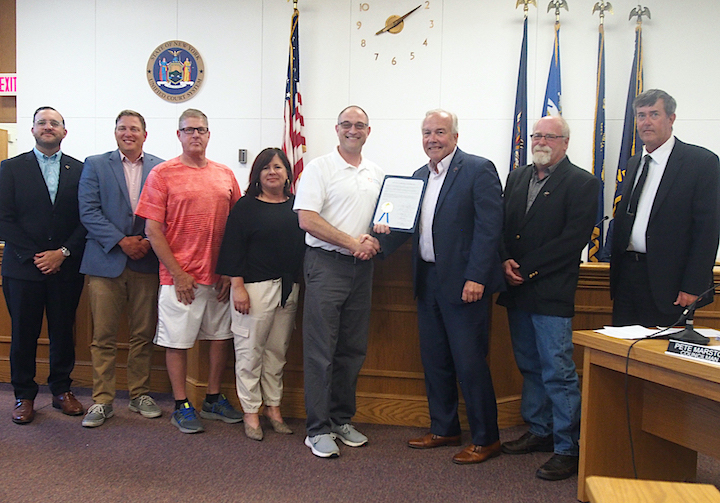 Eric Volk, holding the proclamation, was honored for his work as “announcer extraordinaire” for the annual Dick Bessel Run and Independence Day Parade. He is accompanied by his wife, Janet Volk, and his brother, Todd Lee.