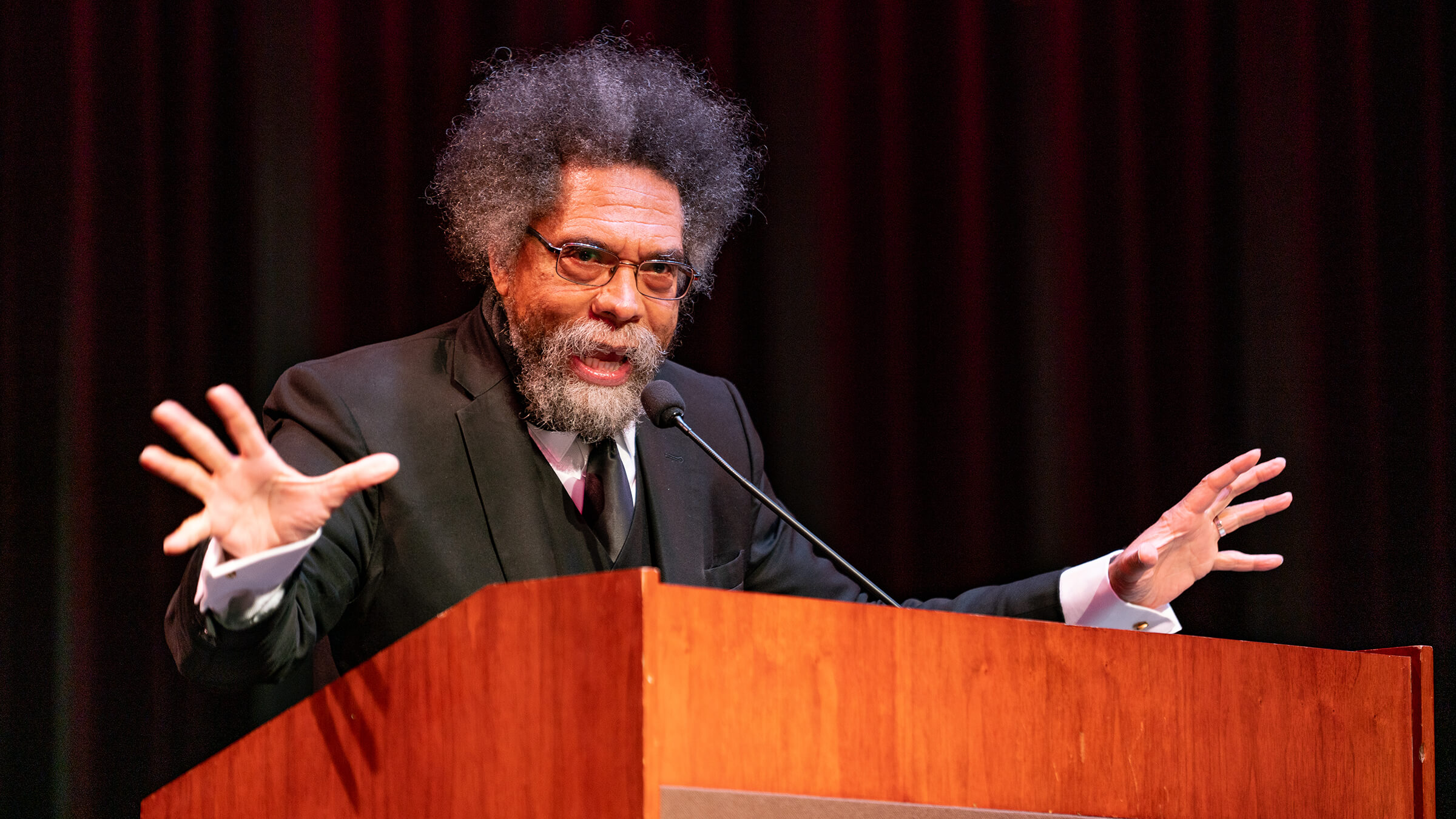 Dr. Cornel West knows how to make an entrance.

On Wednesday, May 11, Dr. West delivered the UC Regents Lecture at Schoenberg Hall at UCLA’s Herb Alpert School of Music. Dr. West’s decades-long status as a leading public intellectual – and philosopher, activist, musician and actor – drew a sizable crowd. To thunderous applause, West knelt down, waved to world jazz studies professor Arturo O’Farrill with both hands, then rose happily to kiss him.

Cornel West’s lecture, “The Musical Vocation in Our Dark Times,” was anything but bleak. Music, West said, was a calling, not a profession. It was about locating the mind, telling the truth, honesty and integrity. He traced the subversive power of music back to the Greek philosopher Plato and passed it on to soul music legend Curtis Mayfield. His concept of integrity extended from 19and transcendentalist of the century Ralph Waldo Emerson to author Henry James to human rights activists Malcolm X and Martin Luther King, Jr.

It left a strong impression on the UCLA students who were there.

“He really is a master storyteller. His dynamics, the way he changes his voice, his comedy,” said Seychelle Gabriel, a third-year ethnomusicology student. She recalled West’s stories of how Afro- Americans have faced systematic terror with beauty rather than violence. In the face of oppression, in the face of catastrophe, West pointed out, black people in America have responded with courage, integrity and beauty. Music and beauty may not overcome terror, but they exist in counterpoint to it.

West’s lecture focused on the aesthetics of black music in America, but he also emphasized the universality of the musical vocation. All great artists, West said, grapple with the problem of what it means to be human. In doing so, they connect human beings with each other, and the present with the past.

“There is no vocation without invocation,” West said, urging musicians to invoke the great musicians who came before them. Students pursuing a musical vocation need to be in touch with their voice, West said, but also draw inspiration from musicians working in traditions around the world. He recalled how Edward Said, the great scholar of postcolonialism, found inspiration in Brahms’ piano concertos. Legendary crooner Frank Sinatra has summoned the jazz vocal genius of Billie Holliday.

This idea of ​​invocation is what initially prompted Seychelle Gabriel to study ethnomusicology.

“My dad listened to a lot of classic rock music when I was growing up,” she said. “I found Jimi Hendrix, then I found Muddy Waters, then Bessie Smith, and you go back and forth, and you find Storyville, New Orleans, and all the foundations. We all have a musical journey.

West emphasized that artists pursuing musical calling must do so with integrity. This is especially the case in modern America, West said, where art is constantly judged by its market appeal and everything is for sale. Such pressures threaten integrity, and West urged musicians to stay true to their roots and their own artistic identity.

“This is who we are, we are a continuation of the dead, of our grandparents,” said Mikey Aboutboul, a freshman musicology student from Israel. “Not just from our families, but from people on the other side of the globe. That’s what I love about musicology. When you discover different music, you learn about yourself. We are all part of the same humanity.

Aboutboul paused for a moment. “That’s what musicians really are. We are soul seekers.

At one point, the moderator turned off the microphone in an apparent attempt to wrap up the program, probably out of respect for the speaker’s time. But West scanned the audience, one hand perched, like a salute, on his forehead to block out the glare of the stage lights.

“There’s another question here,” he said, pointing for the front row. “The younger brother here has a question.” The moderator dutifully turned the microphone back on and ran to hand it to the student.

That wouldn’t be the last question West would ask.

Finally, the conversation and the questions ended. Audiences shattered, some heading out and home, others congregating in the hall, some outdoors in the evening on the steps of Schoenberg Hall. But long after most of the onlookers had left, West lingered in the aisles, talking with the students, taking photos with them and hugging each one.

On his way out, he spotted the one student he hadn’t spoken to yet, walked over to him and gave him a big hug. “Thank you for coming, brother,” he said, waving his hand one last time before leaving.

Cornel West makes a lasting impression, even when he leaves the room.