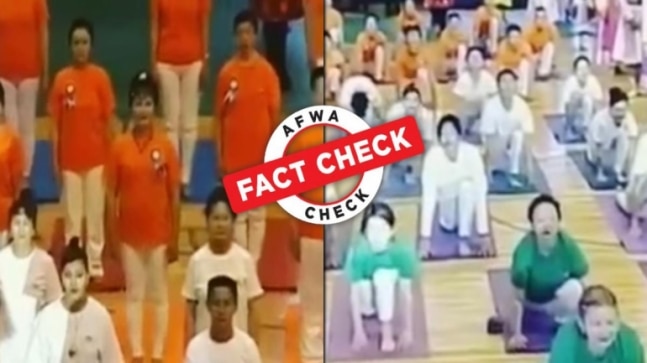 A video of Surya Namaskar is circulating the internet with social media users claiming it was shot during the opening ceremony of the Tokyo Olympics in 2021.

A video of Surya Namaskar (sun salutation) has gone viral on social media with the claim that it was made during the opening ceremony of the Tokyo 2020 Olympics.

The one-minute video, according to the claim, shows performers dressed in tricolor clothing performing Surya Namaskar – a sequence of 12 yoga poses.

Several Facebook users posted this video with the caption, “Surya Namaskar @ Olympics At the Opening ceremony of the Olympics in Tokyo – Japan with our National flag Dress Code”

India Today Anti-Fake News War Room (AFWA) discovered that the viral video is from Mongolia and not from the ongoing Tokyo Olympics.

During Prime Minister Narendra Modi’s visit to Mongolia in 2015, a community reception was hosted by the Art of Living Foundation at Buyant Ukhaa Stadium in Ulaanbaatar, Mongolia on May 17th and Surya Namaskar was performed during this event.

Archived versions of articles are saved here and here.

With the help of Invid and reverse image search, we found a longer version of the viral video from PM Modi’s YouTube channel. This video was posted on May 17, 2015.

Here in the YouTube video, at 5.31 minutes, we can see the footage of Surya Namaskar. The viral video was taken from this portion of the longer video.

Prime Minister Modi had visited Mongolia in 2015 to forge a link between the two countries. During this visit, a colorful program was organized by the Art of Living Foundation in Mongolia for the Prime Minister. The Foreign Office also tweeted about the event on the same day.

India & Mongolia – United in spirit and now also through Yoga. PM @Narendra Modi attends the prog by the Art of Living pic.twitter.com/PXO2dqA8vv 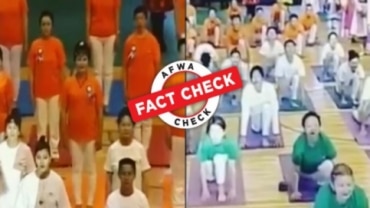 ClaimDuring the opening ceremony of the Tokyo Olympics, Japanese artists wore Indian tricolor clothing and performed Surya Namaskar.ConclusionThe viral video is from Mongolia and not from the Tokyo 2020 Olympics. During PM Modi’s visit to Mongolia in 2015, a community reception event was held on May 17th and Surya Namaskar (sun salutation) was there. present.

The number of crows determines the intensity of the lie.

Click here for IndiaToday.in’s full coverage of the coronavirus pandemic.

From the editor: introductions and greetings