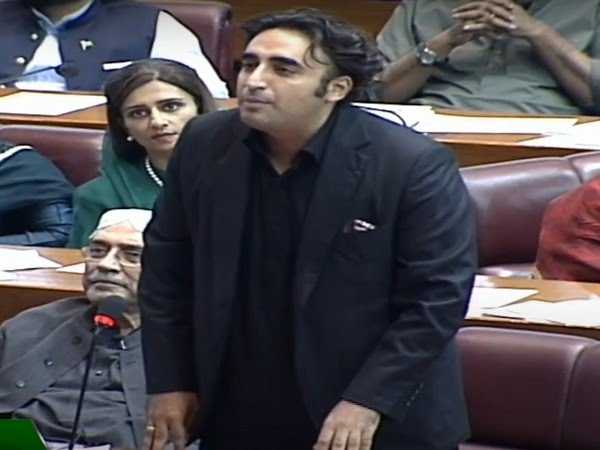 Bilawal Bhutto Zardari, chairman of the Pakistan People’s Party (PPP), on Saturday welcomed the approval of a no-confidence motion against Imran Khan and urged members of Pakistan’s National Assembly to commemorate April 10, 2022, as a moment important in the history of the country. Pakistan’s Tehreek-e-Insaf (PTI) administration of Imran Khan was removed from office on Saturday, ending weeks of high-octane political drama. After the House reconvened after midnight, the motion of no confidence was finally passed. In the 342-member chamber, 174 MPs voted in favor of the measure.

“174 members registered their votes in favor of the resolution, hence the resolution for the vote of no confidence against Imran Khan, the Prime Minister of Pakistan, was passed by a majority,” said Ayaz Sadiq of the Pakistan Muslim League. (NOT). , who chaired the session at the National Assembly. Speaking to Pakistani parliamentarians after the adoption of the motion against Imran Khan, Bilawal Zardari recalled what happened on April 10 and said on that day that Pakistan had approved the 1973 Constitution. April 1986, Benazir Bhutto ended her self-imposed exile and arrived in Lahore to launch her struggle against former Pakistani President Muhammad Zia-ul-Haq,” he said.

“Today, 10 April 2022, we welcome purana Pakistan,” Bilawal told Pakistan’s National Assembly. “I have a message for Pakistani youth that they should never give up on their dreams because nothing is impossible. Democracy is the best revenge,” he added. Before taking office in 2018, Imran Khan had pledged to create a “naya Pakistan” – a country free of corruption and with a prosperous economy. However, over time, there were fewer takers of this empty slogan. The vote on the motion of no confidence was undertaken with Pakistan Muslim League-Nawaz (PML-N) leader Ayaz Sadiq presiding over the session after House Speaker Asad Qaisar resigned following a meeting with Imran Khan.

On a dramatic day, the session of the National Assembly was adjourned shortly after convening in the morning amid heckling in the House. The House reconvened at around 2:30 p.m. (local time) and adjourned again after speeches by Foreign Minister Shah Mahmood Qureshi and several opposition leaders, including Bilawal Bhutto Zardari. The House reconvened at approximately 7:30 p.m., only to adjourn again after an hour of deliberations. The Assembly was finally convened after midnight following the resignation of the President.

Declaring the Vice President’s decision “contrary to the Constitution and the law and of no legal effect”, the Court annulled all subsequent measures, including the dissolution of the National Assembly, while reinstating the Prime Minister Imran Khan and all federal ministers in their respective posts from April 3. The court also fixed the Saturday session on the condition that the session could not be prorogued unless the motion passed, and in case Imran Khan lost the vote of no confidence, the next PM was to be elected during of the same session.

Imran Khan had also called a Federal Cabinet meeting for 9 p.m., leading to speculation whether the vote on the no-confidence motion will take place on Saturday, as instructed by Pakistan’s Supreme Court. Pakistan’s Supreme Court, in a landmark judgment on Thursday, had called for the National Assembly session to be convened “no later than 10:30 a.m. on Saturday” after overturning Vice President Qasim Khan Suri’s April 3 ruling against the non-motion of confidence on “constitutional grounds”.

Ad of the week: The Salutation – The historic Doncaster inn that really lives up to its name