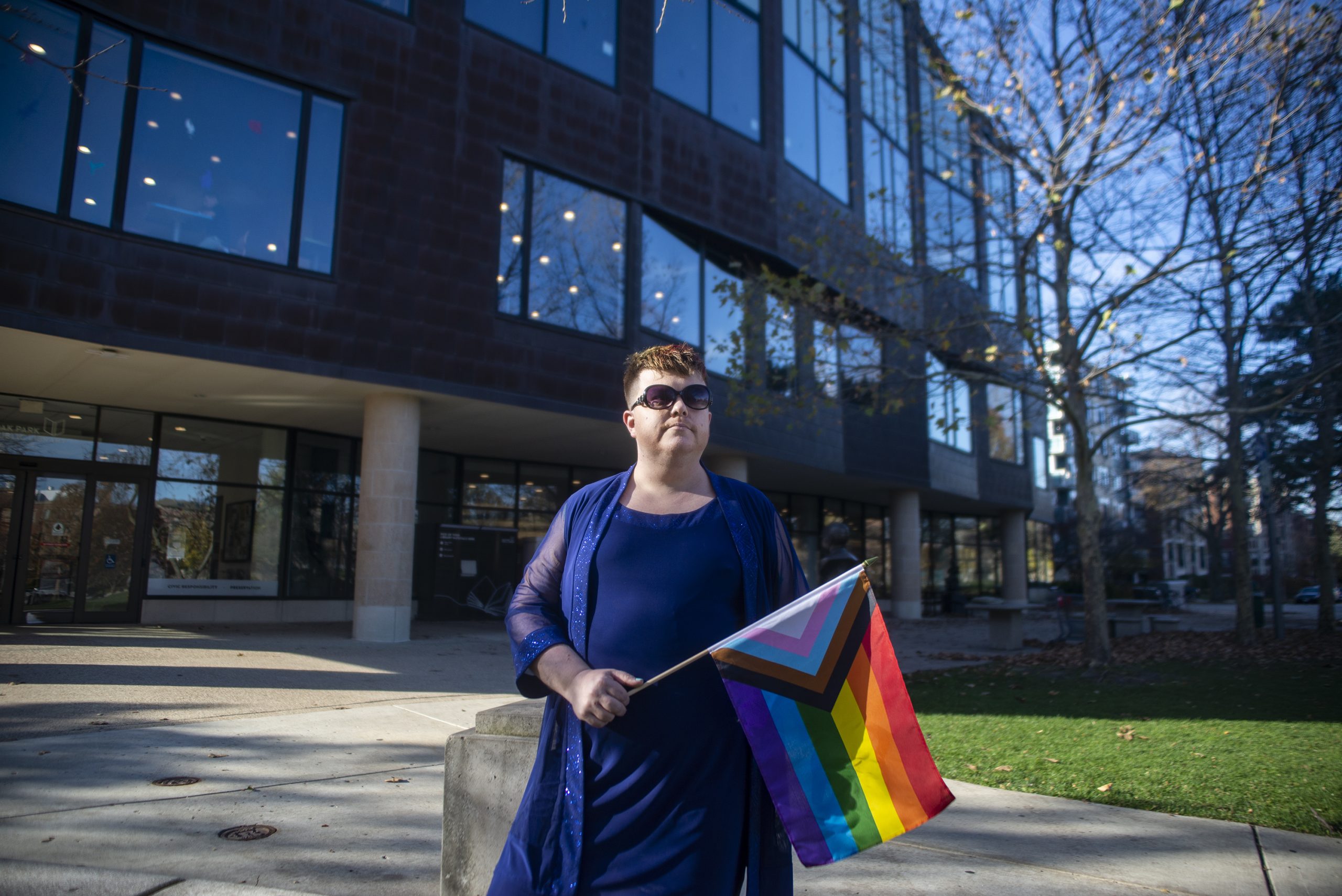 Gender education is at the heart of this month of November for Aaron McManus, who worked with two local organizations to raise awareness of the importance of living your authentic self and empowering others to do the same.

“The takeaway here has to be that forcing gender on people in any way is detrimental,” McManus said.

Not everyone is a perfect match to the genders assigned to them at birth, he says, but societal norms routinely reinforce these designations on individuals to the detriment of their mental and physical health. McManus urges people to examine this in greater detail so that, through empathy and understanding, the community can begin to dismantle the outdated idea that genitals define gender.

“When I was a kid, I was always asked the question, ‘Are you a boy or a girl?'” McManus said. “It was always a hostile question and I learned very quickly that it was never going to be followed by a friendly question.”

McManus is a non-binary Oak Parker whose pronouns change depending on the occasion. For consistency and clarity, he approved their use in this story.

To help parents and caregivers raise their children to see gender beyond the binary, McManus, who is a father, is co-hosting a virtual education workshop Nov. 15 on gender identity and gender. diversity through the non-profit organization Oak Park Our Whole Lives.

“Gender is a social role based on the idea that how someone reproduces sexually should determine all of their behavior throughout life and there is nothing inherently valid about it,” said said McManus.

They are also working with the Oak Park Public Library on an exhibit in the main library in recognition of Transgender Day of Remembrance, celebrated annually on November 20 to honor the lives lost to transgender violence.

To set up the Idea Box exhibit, McManus worked alongside Juanta Griffin, OPPL’s ​​Multicultural Learning Coordinator, and Hal Patnott, OPPL’s ​​Rainbow Services Librarian and transgender man. Griffin could not be reached for comment.

The display will be ready for viewing this week. As well as honoring transgender people who have lost their lives to violence, the exhibit also provides information about legislation that discriminates against people who do not conform to the idea that it is not there is only one man and one woman.

“Until we can live in a world where we are not oppressed by the gender binary, then none of us can truly be ourselves,” Patnott said.

In the Main Library’s Suggestion Box workshop and exhibit, McManus will explore the ways in which misinformation, cloaked as scientific study, promotes the binary gender system, which excludes transgender, non-binary, and transgender people. fluids, who in turn suffer from isolation, bullying, depression, self-harm, and abuse. Their lives are further constricted and devalued by legislation that portrays them as depraved and violent.

This has perhaps been most prevalent with laws that prohibit transgender people from using gender affirming restrooms. These ‘toilet bills’ are fueled by fears that allowing transgender people to choose which toilets to use will lead to an increase in sexual assaults and rapes of cisgender people, despite the scant credible evidence at hand. support for this assertion.

“Misinformation is very much tied to the political need to create an enemy,” McManus said.

Scientific studies have actually proven the opposite to be true. By forcing someone to use the bathroom that matches their biological sex, that person is at a higher risk of being sexually assaulted or raped. This risk also extends to transgender adolescents.

A 2019 study published in the medical journal Pediatrics found that 26% of 3,673 transgender and non-binary middle and high school students surveyed in the United States said they had been sexually assaulted in the past 12 months. That figure rose to 35% among those who attend schools that restrict access to bathrooms and changing rooms. Transgender girls are more than twice as likely to be at risk when they have to use the boys’ bathroom, according to the study, which draws on data from the Human Rights Campaign and researchers from the University of Connecticut.

In addition to these already alarming rates, LGBTQ+ youth are at greater risk of self-harm and suicide, according to a 2022 Trevor Project survey. The Trevor Project found that 59% of transgender men and boys surveyed had considered suicide over the past year. For non-binary and gay youth, it’s 53%. And the figure was 48% for transgender women and girls. Those who questioned their gender experienced similar percentages.

“There are lives at risk,” Patnott said.

“I struggled at the time with the language because I very distinctly remember telling the doctors that my depression was situational,” McManus said. “They kept telling me something was wrong with my brain.”

Compared to rates for cisgender people, the difference is noticeable. Twenty-eight percent of cisgender men and boys and 37% of cisgender women and girls have considered suicide in the past year.

For cisgender people, McManus is not just asking for recognition of the breadth of gender. They don’t just ask for understanding. They ask for acceptance – genuine acceptance, especially from parents.

“If you want to be able to offer your child unconditional love, your gender constructs can’t stand in the way.”