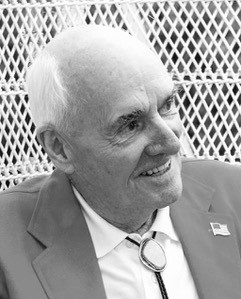 On June 1, 2022, Captain Richard Griffiss Alexander, US Navy (Retired), cast off and peacefully crossed the bar, surrounded by his family. He was 99, just two months before 100.

Richard, or Dick as he was known to so many, was married to the love of his life, Hope Hodgman Powel, for 72 years until his death in 2019. He was predeceased by his brother William Henry Alexander and is survived by his sister. , Katherine Alexander Grimes of Jamestown. He leaves behind four children and their spouses: Hope and Lloyd Griscom, Lisa and Tom Goddard, Kate and Toby Field, and Tim and Kathleen Alexander. Dick was the beloved patriarch of eleven grandchildren: Hope Strode, Charlotte Strode Beck, Tom Goddard Jr., Libby Goddard, Caroline Goddard, Alex Field, Julia Field Driscoll, Heather Alexander Sanchez, Brooke Alexander Meyers, Sam Alexander and Hope Alexander Hutchinson and twelve great-grandchildren, with more on the way. Until the end, he reveled in the life of his whole family. He was extremely grateful for the love and care of his family during his later years and therefore appreciated the help and support of his caregivers.

Captain Alexander, “captain” to many, was born in San Diego Bay, California on August 1, 1922, the son of United States Navy Lieutenant Ralph Clonts Alexander and Elizabeth Gates Evans. His early arrival aboard the Admiral’s Barge at the Fleet Landing provided a unique start for a man who faithfully served the United States Navy for 26 years.

A Navy junior, Dick lived in Coronado, Washington and Annapolis where, at the age of six, he sailed aboard the yacht America. He graduated from St. Alban’s School before entering the US Naval Academy, Class of 1945. However, due to the needs of the Navy during World War II, this class graduated and joined the fleet in 1944 .

Ensign Alexander reported to his first ship, USS Cushing (DD-797) in the Southwest Pacific as a navigator. On September 2, 1945, he witnessed the Japanese surrender firsthand aboard the USS Missouri. Over the next 10 years he held various positions on the USS O’Hare (DD-889), the presidential yacht USS Williamsburg, the USS Rooks (DD-804) and the USS Mitscher (DL-2) . After shore assignments at the Naval War College and the Bureau of Naval Personnel, he returned to sea as Executive Officer of USS Jonas Ingram (DD-938), followed by Command of USS Hartley (DE-1029 ). In 1962, after serving as Assistant to the President, Naval War College, he assumed command of USS Semmes (DDG-18). In 1967, Captain Alexander presented himself as the future commanding officer of the USS New Jersey (BB-62), which was being reactivated for service in the Vietnam War. He retired in 1970.

Throughout his life, Dick was an aviation enthusiast. While in high school and with the support of his uncle, US Army Air Corps Lt. Col. Townsend Griffiss, he took flight lessons at Hillsgrove State Airport in Providence, before heading to the naval academy. An aircraft owner for many years, he enjoyed the excitement and camaraderie of the aviation community. He traveled extensively in his plane with his family and friends and enjoyed teaching others to fly, including his children.

After 26 years of dedicated service to our nation and the Navy, Dick has embarked on new interests. He was very proud of having succeeded in establishing viticulture on Aquidneck Island with the founding of Hopelands Vineyards (now Newport Vineyards), first on Indian Avenue and later on its present site on East Main Road.

Dick had a very warm place in his heart for the Clambake Club in Middletown, serving as President from 1979 to 1984. In recognition of his outstanding leadership, the club made him an Honorary Life Member and President Emeritus.

He spent his life seeking knowledge and he had a great understanding of history, society, the world and the universe. He never missed an opportunity to share his knowledge to educate and inspire. Dick mentored his children, nieces, nephews and many young people, teaching them important life lessons on a sailboat, in his workshop and garage, in his airplane and in the vineyards. He was an extraordinary toastmaster, using his platform to both entertain and educate. He was a prolific writer, author of many professional articles and often shared his views in letters to the editor of the Newport Daily News and Providence Journal.

The captain loved God and his country, supporting many charities that improved the lives of veterans and those in need. Dick served St. Columba’s Chapel in Middletown, joining the vestry as treasurer and then as chairman of the cemetery committee. He significantly improved the parish cemetery management systems and developed a detailed oral history of many cemetery residents.

Dick Alexander will be remembered for his ever-present gratitude for the blessings of life and for demonstrating, by word and example, how to age gracefully. He will be greatly missed.

A celebration of Captain Alexander’s life will be held at St. Columba’s Chapel on Tuesday, June 14 at 11 a.m. In lieu of flowers, donations may be made to St. Columba’s Chapel, 55 Vaucluse Avenue, Middletown, RI 02842 or another charity of your choice.