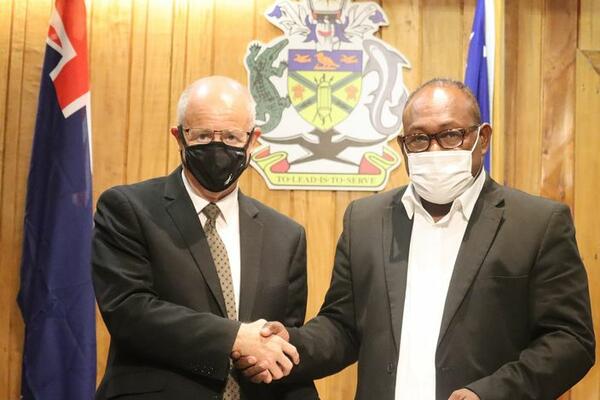 The New Zealand High Commissioner says his country is committed to supporting a stable region and adds that a healthy diplomatic relationship is more important than ever as we continue to address the need for cooperation and cohesion across the region.

High Commissioner Jonathan Schwass made his first official visit to the Prime Minister’s Office and was met by the Acting Prime Minister as Prime Minister Hon. Manasseh Sogavare was currently on tour in East Choiseul constituency.

The Solomon Islands values ​​its friendship with New Zealand and will do everything to further strengthen the existing relationship, Acting Prime Minister Maelanga stressed.

His Excellency Schwass meanwhile assures that one of his main priorities is to further develop the labor mobility program so that the CSR program benefits more people.

He adds, “Cooperation continues in the areas of education, youth, economic diversification and provincial connectivity, the scholarship program and the Royal Solomon Islands Police.”

“I am keen to hear SIG’s priorities and look forward to more substantive meetings with government. There is more to do. I will do my best during my tenure. »

He says New Zealand is committed to supporting a stable region and adds that a healthy diplomatic relationship is more important than ever as we continue to address the need for cooperation and cohesion across the region.

Disclaimer: Solomon Times Online may edit or delete your comment and cannot guarantee that all submissions will be published or remain online. The comments expressed on these pages are those of the authors and do not necessarily reflect the official policy or position of Solomon Times Online.

Know how to perform puja and learn about mantras