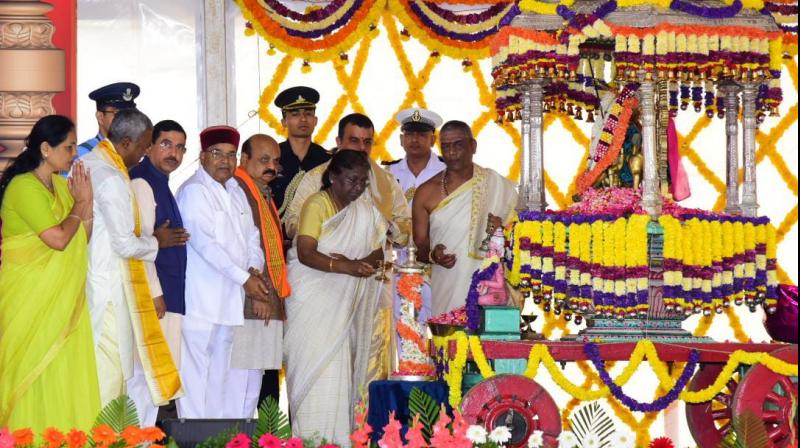 The President said that Karnataka ranked first in the country’s investment index, while Bengaluru has emerged as the start-up hub in the country. Underscoring the state’s achievement, she said, Karnataka ranks first in primary education enrollment and road connectivity under Pradhan Mantri Gram Sadak Yojana.

Murmu is the first president to participate in Mysuru Dasara. She was accompanied by Karnataka Governor Thaawarchand Gehlot, Chief Minister Basavaraj Bommai, Union Ministers Pralhad Joshi and Shobha Karandlaje and several state cabinet ministers among others during the inauguration.

Celebrated as ”Nada Habba” (state festival), the festivities will be a grand affair this year depicting the rich culture and traditions of Karnataka, coupled with a reminiscence of royal pomp and glory, after muted celebrations over the past two years in view of the covid19 pandemic.

The High Power Organizing Committee headed by the Chief Minister has decided to resume the jumbo savari (elephant walk) in which tamed elephants walk from Mysuru Palace premises to Bannimantap and a designated elephant carries a howdah golden of 750 kg.

As many as 13 tamed elephants from various elephant camps were brought to Mysuru Palace to participate in the festivities. As part of the Dasara festivities, the Chamundeshwari Electricity Supply Company (CESC) lit up the city’s roads and circles. Road and circle lighting is a major crowd driver, making city roads busier in the evening.