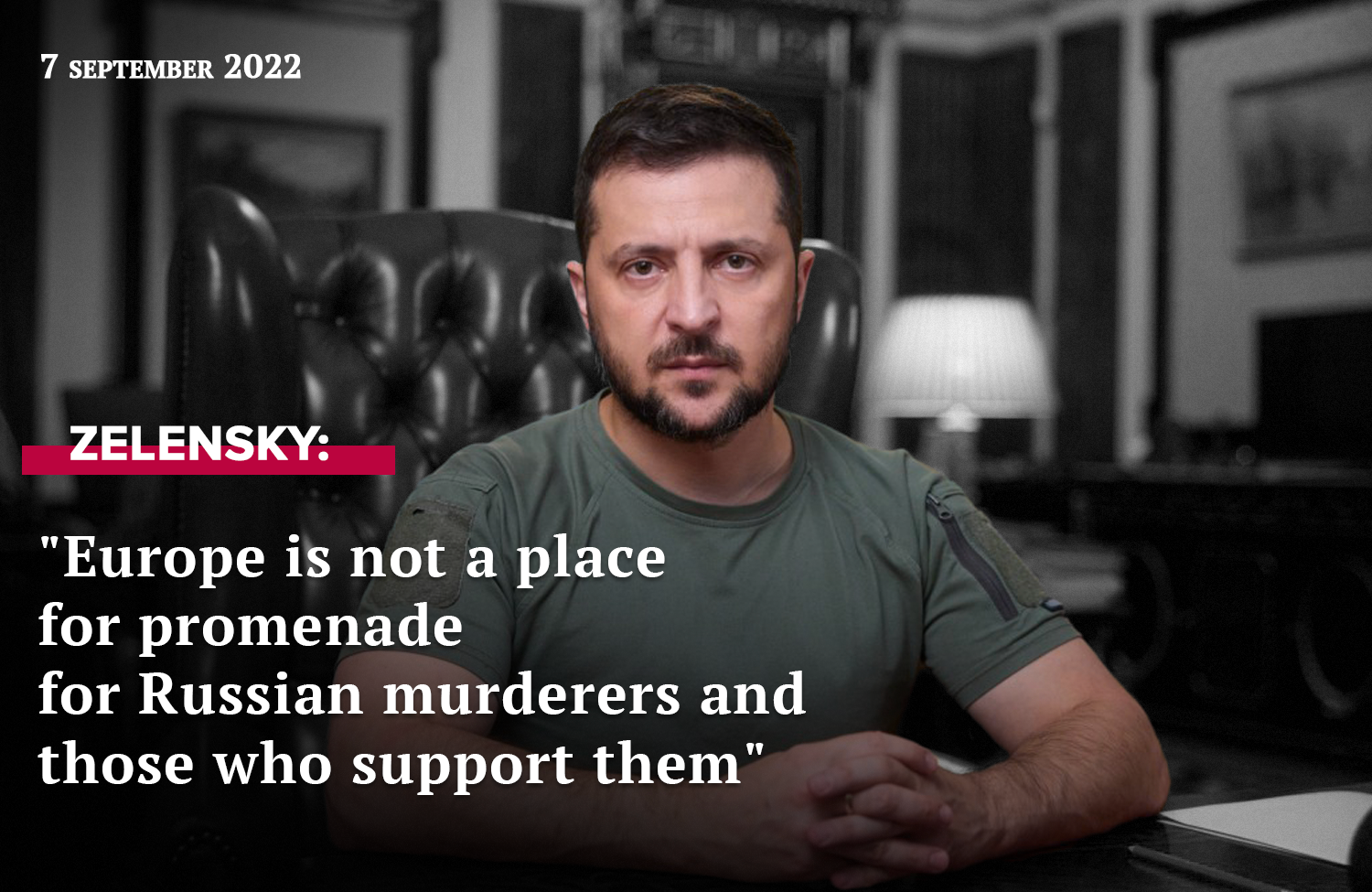 In Zelensky’s last address on Tuesday evening, September 6, the Ukrainian president said that Europe is no place for Russian murderers and those who support them. Zelensky also said that the European Union has taken an important step in the issue of visas for Russian citizens.

Read the president’s full address below:

We have important events today.

The European Union has taken an important step in the issue of visas for Russian citizens. The European Commission has approved a proposal to suspend the simplified visa regime currently in place between the EU and Russia.

Of course, this is not yet a total visa ban. But this already demonstrates to the citizens of the terrorist state that they bear a certain moral responsibility for the aggression of their state against Ukraine and the whole of Europe.

There is such a situation now, where it is inadmissible to remain silent. And it is inadmissible not to oppose terror. It is absolutely unacceptable that European territory can be used for tourism or shopping by those who, at home in Russia, not only support the split and mockery of Europe, but also work for it. And it cannot be taken lightly that Russian propagandists can still stay in European countries, lying daily in reports and broadcasts from European capitals. Lie on Europe! Humiliate Europe! And at the same time be in Europe. A nonsense that must be stopped immediately.

I am grateful to the President of the European Commission, Ursula von der Leyen, and to all European leaders who support visa restrictions for Russian citizens.

And it must be remembered: in addition to the moral side of the question, it is also a question of elementary security. Russia has repeatedly sent killers to Europe disguised as ordinary tourists. They have already admired enough the spire of Salisbury, the streets of Germany and the warehouses of arms in the Czech Republic. Sufficient. Europe is no place for murderers and those who support them.

The second important piece of news is the IAEA report. The mission, which visited the Zaporizhzhia nuclear power plant, presented a documentary summary of its work. The report notes the presence of Russian military equipment on the territory of the nuclear power plant, emphasizes the pressure exerted on our nuclear specialists and clearly refers to the Russian military occupation. Its good.

As for the proposal of the Director General of the IAEA Grossi to create a protection zone at the power plant, it is necessary to consider the specific content of such an instrument: what exactly can the protection be? If the content of this proposal is to demilitarize the territory of the nuclear power plant – and this is logical, because it was the Russian military presence that brought the Zaporizhzhia power plant to the brink of a radioactive catastrophe – then we can support a such demilitarized protection zone.

In any case, I believe that modern international organizations need a much broader mandate for their actions. I believe that the world not only deserves, but also needs the representatives of the IAEA to force Russia to demilitarize the territory of the nuclear power plant and return full control to Ukraine.

If Russia puts the world on the brink of a radioactive catastrophe, the world must have adequate means to put Russia in a condition where the terrorist state will be forced to stop the terror.

I took part in a number of important economic events in New York today – our government delegation headed by First Deputy Prime Minister Yulia Svyrydenko is there.

The resistance to Russian terror and the protection of our state are at different levels. Defense goes hand in hand with diplomatic efforts, information work and, of course, the economy.

Saving and creating new jobs in Ukraine, attracting investment and business projects, developing logistics capabilities, protecting our needs for financial assistance – all this is absolutely necessary. And it’s needed now – while the war is still going on.

One of the world’s most famous stock exchanges, the New York Stock Exchange, is one of the best places to focus global economic attention on Ukraine. And today was a Ukrainian day on the stock exchange. And this Ukrainian day launched a global campaign to promote our economic potential. We will do everything to make the world’s largest companies work with Ukraine and in Ukraine. Obviously the main challenge here is security. We are constantly improving our ability to meet this challenge – to protect our state and our people.

Today I want to thank the warriors who have distinguished themselves in this field.

Five of the six Russian Kh-101 missiles were shot down only in the first half of the day. It’s a costly loss for Russia – and it saved many Ukrainian lives.

Four of these missiles were shot down by soldiers from Air Command South. Well played guys!

Also, a special thank you today to the warriors of the 79th Airborne Assault Brigade, who heroically pushed back the enemy in the direction of Donetsk.

By the way, today I want to address all our people who create an information image – one way or another. Please draw your attention and that of the society to the fact that the fierce confrontation continues almost on the entire front line. That’s one thousand three hundred kilometers of active hostilities. And it’s just unfair, when we talk a lot about certain areas of the forehead, while others seem to be forgotten. Although our warriors in many directions are doing absolutely tremendous work, they are absolute heroes.

In the Donbass, in the Kharkiv region, in the Zaporizhzhia region, in the south, in the northern and eastern border regions of the country. The defense of the whole state deserves equally sincere and serious attention.

I held a meeting of the Supreme Commander-in-Chief’s staff – we are resolving all issues related to the advance of our armed forces and the destruction of the occupiers as quickly and accurately as possible. 50,000 Russian lives have already been lost in this completely senseless war for Russia. And the occupants do not even care about such a level of losses.

And we care about every life of our heroes, our defenders. We do everything to protect the lives of Ukrainians. And I thank the partners who help us.

Today, my diplomatic day began at 8 a.m. – with a conversation with Ms. Nancy Pelosi, Speaker of the United States House of Representatives. As always, productive and very warm. We have coordinated our steps to protect Ukraine and freedom as such from Russian aggression.

In the afternoon, I spoke with the Prime Minister of the Netherlands, Mark Rutte, about the increased sanctions pressure against Russia, the new defense and macro-financial assistance to our country. I’m very grateful.

I have just had a conversation with the new Prime Minister of Great Britain, Mrs Liz Truss. It was his first conversation in his new status with a foreign leader – and it is a great honor for Ukraine.

I congratulated the Prime Minister for the start of her work and I feel that we can build a deep and fruitful relationship.

The Prime Minister takes office at a time of great difficulty. Russian energy blackmail, constant efforts by the terrorist state to destabilize the political situation in Europe and the free world, constant Russian disinformation…

However, by maintaining our unity and working in perfect coordination, we can overcome this as well.

We discussed how to further increase the pressure on Russia, so that the price of aggression for her constantly increases. And so that defense support for our state also constantly increases. I heard very important words about our cooperation, future security guarantees for Ukraine and the reconstruction of our state. It is very important that Britain retains a leading role in building up the free world and protecting freedom.

I invited the Prime Minister to visit our country. And I am grateful for the firm confidence that Ukraine and the free world will certainly win in this war started by Russia.

I am grateful to everyone who protects Ukraine and freedom!

Only a few tickets left for the FACETS Screen Gems benefit on Wednesday, September 28 | Parties and Awards