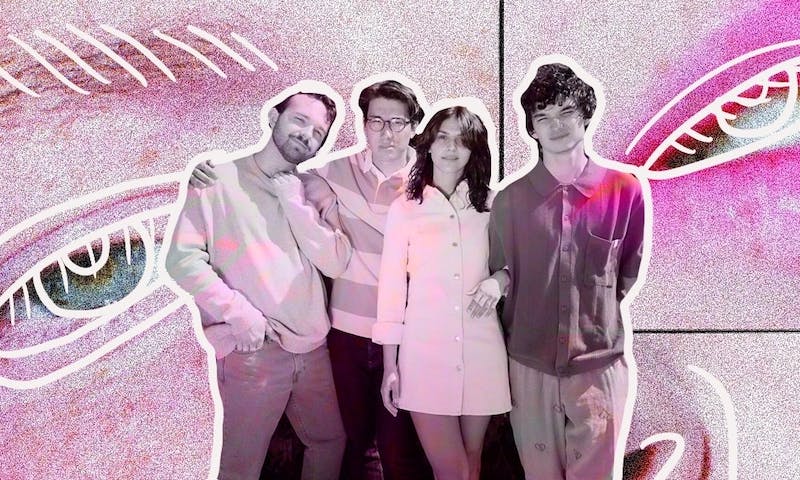 Say hello to the welcoming committee

Basically, East coasts (and West, for that matter) don’t seem to know much about my home state of Kansas. Whether you’re imagining endless wheat fields and grazing cows or absentmindedly humming “Over the Rainbow,” it’s safe to say there’s another, lesser-known side to this Midwestern state (though tornadoes are real). As a Kansas girl now living in the Northeast, I’m legally obligated to champion the best neighborhoods in my hometown – and it’s a pleasure to introduce the host committee to you.

The Welcome committee was originally formed by Addie Sartino, Brandon Yangmi, Pierce Turcotte and Austin Fraser. They met in high school in Overland Park (a suburb outside of Kansas City) and released their first EP in March 2015 while still in school. In a recent shuffle, the band’s new drummer, Micah Ritchie, replaced Fraser.

Yes, they’re a local band, but their music isn’t just for locals.

It’s not so bad

The Greeting Committee has two full albums, three EPs and a few singles. Their first EP, It’s not so bad, was released in 2015 and features five songs that exemplify the band’s skill set of lofty instrumentals complemented by grounded lyrics. Listen to it in order, and pay attention to the second track”Fingers in the nose“It’s their most-streamed song on Spotify and will inevitably inspire a full dance party. Then notice the introspective slip that takes place in the third track,”out of my head.” The welcoming committee music deftly addresses self-reflection, evaluation in a way that feels almost unbiased, yet deeply personal.

The fourth track, “That does not bother me“, opens with the rhetorical question “Why do I keep pretending / Everything is temporary”, with striking honesty and simplicity. When you get to the final track, “do it rightyou can start dancing again, but this time out of righteous anger, rather than euphoric love. It’s the full range of youthful emotions that can only be captured by a bunch of high school kids in a band; that’s the beauty of it.

The next step is Meeting people is easy, their second EP released in 2017 which cemented their place as an indie band that is both a coming-of-age movie soundtrack and a stripped-down confessional. “Velvet– the first instrumental track – captures a sense of wonder that quickly turns into what one would play in the background while investigating the mysteries of the universe and suddenly discovering the meaning of life.

The rest of the EP picks up where It’s not so bad left out, but with increased sophistication. “She is a gun” is the finest of one of the band’s signatures – a portrayal of an inevitably doomed romance, on an instrumental track that demands full vocals in your hairbrush moment. It’s probably the happiest you’ll ever have. shouting “She’s gonna kill me!” There’s an unabashed self-awareness about this EP that makes the welcoming committee feel special.

In 2018, they released their first album, That’s it. It’s an examination of childhood and the eerie feeling that comes with having it left behind, exemplified by the title track genre, “Is this?(“I fell asleep in a stranger’s bed/In the house where I grew up”).

“Star of gold” and “birthday songare contemplative visions of the fate of youth – the first grappling with the demanding expectations of the world (“I don’t think I can be all I want/In the hearts of others), the second with a child whose optimism is shattered (“You learned to hate your birthday”).

Yet there are moments of resilient, even stubborn hope. “17is a powerful moment of clarity: an optimistic celebration of growing up and claiming ownership of your life. And it really captures what it’s like to be 17. The final track, “Do not leaveencapsulates the feeling of growing up and watching the world evolve, but staying behind (“Don’t go / I’ll never do it alone”).

I’m afraid not to be angry

I’m afraid not to be angry is a soulful four-song EP that deals with existential fear and the dread of being alive – from “just survive”, which is the second track. It’s less hopeful and more resigned than their previous work. The Greeting Committee’s music is still unwaveringly existential, but on this EP they address these questions with a new sense of urgency and nostalgia (“What’s left to me but just surviving?”).

And yet you will continue to dance. I’m afraid not to be angry assesses the absurdity of trying to get by (“There’s tomorrow/When I can’t even get by today”) while maintaining a respectful appreciation of life. And, it confronts lofty and universal questions with a disarming familiarity that just might make you a little saner.

Finally, their latest album, Dandelion, expresses the same volatility of emotion, but with a greater maturity that is reflected in the colder and more produced instrumentals. That’s it: the breakup album. More than that, however, this album is about healing, and it doesn’t shy away from the painful moments of recovery. It’s the raw honesty of their previous work, but it’s more thoughtful, as if looking at the pain of youthful love from afar, while considering its repercussions.

In the last moments of “float awaySartino soberly asks, “Don’t let me down another martyr. It’s a serious call, and one that resonates throughout the rest of the album. There’s no rosy hope in the title track, but there is a refreshing take on reality (“Just another day without you/And I’m alive”).

Like any breakup album, Dandelion is light on love songs – “So it must be truesums up the attitude of the album with the lyrics “Here’s your love song / You only got one ’cause you pissed me off.”Wrapped inside your arms“has that quintessential warm, confessional feel, paired with the dreamlike style of”Dandelion.” It’s the only true love song on the album and represents the kind of connection that the rest of the tracks mourn.

In “kind of stranger“—the album’s final original track and a collaboration with indie artist Briston Maroney—the band puts it all on the table. It’s vulnerable, mature, and thoughtful: everything that makes Dandelion so special. As she sings “I Guess We’re Becoming Our Parents,” the meaning of the album crystallizes: it’s the clumsy but deeply profound wisdom of a young 20-something who gives meaning to life, day after day.

If you only listen to one song, make it “Hands Down”, their first single and most streamed song on Spotify. Best listened to on a winding country road on a 75° sunny day, but a crisp drive on Locust or a mid-afternoon study break will suffice.

Once you’ve heard all the welcoming committee has to offer, you might be tempted to grieve the moment of discovery. But don’t despair, listen to “Hands Down” again (for old times’ sake) and dance. If you really can’t get enough, I have great news: the host committee is currently on tour Dandelion-and you can see them live at the foundry December 7.