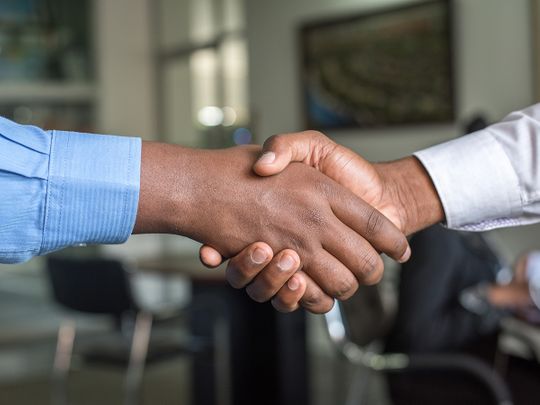 Spell it: Why the usual handshake has become a lethal weapon in the pandemic

Handshakes were especially popular in ancient times. A popular theory, according to History.com, is that the gesture was a way to convey peaceful intentions. When strangers held out their empty right hands, they were able to assure the other party that they held no weapons and had no malicious intent. Even the up and down motion of the handshake had a purpose – it was meant to be a means of dislodging any hidden knife or dagger from a person’s sleeve.

In other circumstances, shaking hands was a way of sealing an oath or promise. It showed people that their word was a sacred bond.

One of the earliest depictions of the handshake comes from a relief, circa the 9th century BC. It shows the Assyrian king Shalmaneser III sealing an alliance with a Babylonian ruler. The Greek epic poet Homer also described the practice in his Illiad and the Odysseyand it was often associated with the display of confidence.

It’s not just the handshake that is part of the usual greetings. A quick kiss on the cheek is known in France as “la bise” and is a standard greeting in many parts of the world, including Latin America, the subcontinent, and the Philippines.

The kiss on the cheek is even more deadly when viewed through the lens of the pandemic – because it plants germs directly in people’s faces. According to a National Geographic report, during the plague in the 14th century, the practice is thought to have been stopped, and only revived 400 years later, after the French Revolution. In 2009, the kiss was once again temporarily interrupted as the swine flu swept around the world. And at the end of February 2020, at the height of the COVID-19 pandemic, the French Minister of Health advised against it because cases were on the rise.

Perhaps one nurse’s advice, taken from a 1929 study published in the American Journal of Nursing, still holds true today. She warned that hands “are bacterial transfer agents” and recommended people adapt the Chinese custom of the time, to shake hands when greeting a friend.

Whether it’s an Indian namaste or an Arabic hand-over-heart gesture, the way we greet each other is changing as our world faces new and highly contagious diseases.

Why Eating Crickets Instead of Beef Can Help Fight Global Warming