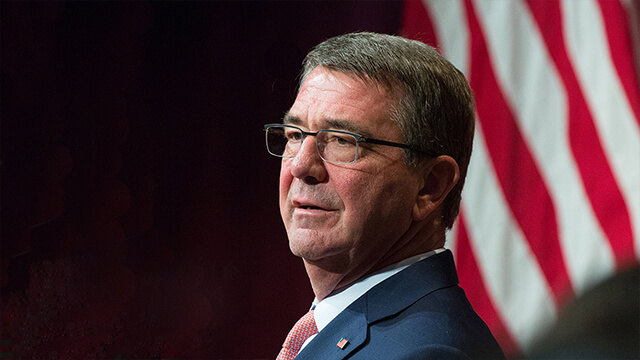 The death of Ash Carter

A message from Dean Douglas Elmendorf

To the faculty, students, staff, and fellows of the Harvard Kennedy School,

It is with deep and profound sadness that I write to inform you that our colleague, teacher and friend Ash Carter passed away last night following a heart attack.

This loss is so sudden and so devastating.

I first met Ash Carter in 2016 at the Pentagon, when he was US Secretary of Defense, and we began our campaign to get him back to school after he left the Department of Defense. We were all honored when Ash join our faculty in 2017 as Belfer Professor of Technology and Global Affairs and Director of our Belfer Center for Science and International Affairs.

Ash Carter has been an important leader of the Kennedy School over the past five years – supporting faculty recruitment, helping to expand our technology and public policy program, creating a project called Technology and Public Purpose, and partnering with me in various collaborative endeavors. Ash was dedicated to our students: He said one of the main reasons he came back here was his Department of Defense experience of traveling overseas and being greeted with the greeting “Hello Professor Carter of his former students. So he wanted to come back and work. with more students, and he helped raise funds for scholarships. Ash was also a leader at Harvard more broadly. For example, he and Frank Doyle, the dean of Harvard’s Paulson School of Engineering and Applied Sciences, have organized a regular gathering of professors and others across Boston who think deeply about technology and society.

Ash Carter’s recent contributions to the Kennedy School are just a small part of the immense contributions he has made throughout his career here, a career that stretches back nearly 40 years. Ash earned a doctorate in theoretical physics at Oxford, but took a keen interest in politics. He started here as an assistant professor in 1984 and was tenured in 1988. He has taught many courses, mentored many future leaders, and helped develop our concentration in international and global affairs. Ash left the School for Public Service between 1993 and 1996 and again between 2010 and 2017 – and it was through this service that he became so well known and admired beyond our campus.

As Secretary of Defense, Ash Carter supervised the military campaign against ISIL, an increased focus on the Asia-Pacific region, a new cyber strategy and a stronger NATO response to Russia. He paid particular attention to investments in technology, including the creation of technology hubs to connect the military with technology experts in the private sector. And he focused on improving the recruitment and retention of talented people, in part by opening all military positions to women without exception. In recent years, he has remained a very prominent public voice and private adviser on matters of national security and international relations.

Much more could – and should – be said about Ash Carter. We will find ways to share the views of the many people at the Kennedy School and beyond who knew Ash and worked with him. For my part, I would like to express my gratitude for his insight and wisdom, his unwavering commitment to trying to make the world a better place, his confidence that the Kennedy School can make a significant difference in the world, his generous spirit towards his students and his colleagues, and his warm and gracious friendship with me. I will miss him so much.

My thoughts are with Ash’s wife, Stephanie, and all of Ash’s family. Our thoughts and sympathies also go out to everyone who knew Ash, learned from him and worked with him. If you would like to speak to someone during this difficult time, please contact your Program Director (for students), your HR contact (for staff), the University Deans’ Office (for faculty) or the Advising Service and Harvard Mental Health (for all). When we have information about a memorial service, we will let you know.

eight best pubs to visit on the tube line