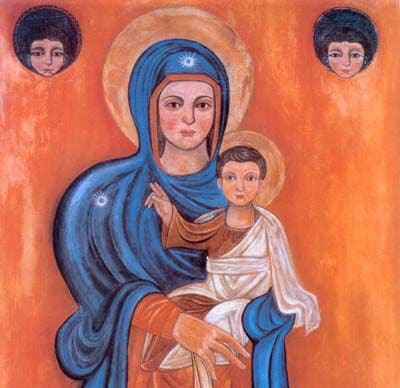 Eastern scholars and theologians assume that the Eastern and Western Churches have shared the same approach to Marian devotion and the angelic greeting, divinely inspired and uttered by the Archangel Gabriel, since the Third Ecumenical Council at Ephesus in 431.

However, since the 4th century, Eastern tradition has used the word rejoice instead of hail as we do now. And instead of graciousthe original Greek translates to prefer.

It was not until the 6th century that the angelic salutation and the evangelical salutation (the inspired salutation of Saint Elizabeth to the Virgin Mary), of Luke 1:28 and Luke 1:41-42 were combined and used in prayer. .

In fact, it was part of the liturgies of St. James of Jerusalem, St. Mark of Alexandria, St. Basil the Great, and even in the Jacobite prayer books! The best and oldest prayer formula of angelic greeting was found in the Book of the Sacrament of Baptism of 647 AD, by Saint Severus, Patriarch of Alexandria, in the following way: “Rejoice, Mary, beloved, for the Lord is with you. You are blessed among all women and blessed is the fruit of your womb, Jesus Christ. Holy Mary, bearer of God, pray for us sinners. Amen.”

It is worth mentioning that this was the first known example of adding a petition to the end of the angelic greeting. The standard but not widely used traditional form in Eastern churches today, in English, is: “Rejoice, Theotokos Parthenos, Mary has favored one, for the Lord is with you.” You are blessed among women and blessed is the fruit of your womb, which bore the Savior of our souls. Amen.”

The word rosary comes from the Roman Latin “rosarium”, which means a garden of roses.

In our Eastern churches, we have always associated Mary with the rosary/roses, long before the rosary reached us. It is mostly because of the story of the Assumption or the “Dormition of the Mother of God” as we call it. Upon opening the tomb of the Blessed Mother, the disciples and apostles found it empty except for the strong smell of roses emanating from it.

So why the smell of roses? If we go back to the Old Testament to the book of Song of Songs 2, a daughter or a bride, the future Bride of the Lord, speaks: “I am a rose of Sharon, a lily of the valley. Like a lily among thorns is my darling among young women. (Song of Songs 2:1-2)

Note that the text does not say “the rose”, but “a rose”. It indicates humility.

In other words, she says she is a common and humble flower of the lowlands, recalling the words of Mary saying, “I am the handmaid of the Lord.

Later and in Luke 1:46-48, we read: “Mary said, for he looked upon the lowliness of his servant with favor.

But the Lord God will lift up the Blessed Mother and accomplish great things through her. Mary became the bride of the Holy Spirit, a Rose of Sharon as Scripture says.

Incidentally, Sharon is a plain at the foot of the one and only Mount Carmel, the mountain where the Virgin Mother is most venerated by Eastern and Western Catholics.

We recall here how the visionaries of Our Lady of Fátima in 1917 – three shepherd children – reported that Our Lady of Mount Carmel is among the titles claimed by Mary in the apparitions. Our Lady identified herself with them as the Lady of the Rosary. A title first appeared in the 12th century according to a Dominican tradition and the famous apparition to Saint Dominic.

This offers an even deeper understanding of the description of the litany to Mary, the “mystical rose”. The wife of the Holy Spirit who was given a rosarium as a sign of love from her husband the Holy Spirit in fulfillment of his prophecy when she said: “From now on all generations will call me blessed (Luke 1:48).

The Rosary in the Maronite Church

As Maronites, the rosary came to us with missionaries and became popular around the 19th century. Like all Catholics, we have integrated the Rosary into our daily life and into our para liturgies, encouraging and promoting it at all times.

When we pray the rosary we participate in a universal Catholic traditional prayer but with a Maronite flavor, usually after praying the daily mystery, we recite or sing the litany to a uniquely oriental tune, followed by the Ya Um Allah (O Mother of God) hymn and procession or “Ziyeh” with the Icon of Our Lady, using a copy of the unique Syriac Maronite Antiochian Icon of Our Lady of Ilije from the 10th century.

“O Mary, Radiant Lily and Fragrant Rose, the aroma of your holiness fills the whole universe. Pray for us that we may be the sweet fragrance of Christ, reaching the whole world. Let our incense be for the preservation of the faith among the living and for the salvation of the faithful departed that we may all inherit eternal life. Amen.” – Divine Maronite liturgy at Notre-Dame